Skip to content
Unlike my other children, Bede is completely unschooled. Being severely autistic meant for years his communication deficits made it impossible to “teach” him anything. However, he figured out how to read at age 2, and has been learning like a house afire ever since. Here he is manipulating a 20th Century Fox logo he built in SketchUp to say “Walt Disney Pictures.” No one has ever shown him how to use the program; he figured it all out.

Here is the ever-chipper Gilbert doing his math. He’s working his way through Miquon, but what he really loves is Life of Fred. We save that for Fridays. One of my favorite things about Gilbert’s math pages are the doodles he draws. He always has some Goldberg-esque machine with little stickmen. 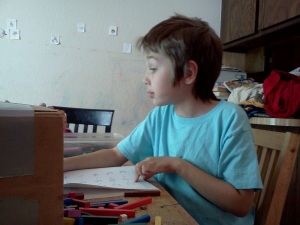 Earlier there was a knock at my door. I opened it up to see an exterminator, who asked that I keep my kids inside because he was spraying for box elder beetles next door. Poor lil bugs.

3 thoughts on “the sons”