Man were we sick. But now we’re okay!

We went to co-op yesterday, after being away for over a month between holidays and sickness. Everyone did pretty well. I keep the uncooperative ones (ha ha, you see what I did there) in the vestibule while the students are in class. It’s a pain to stay and a pain to leave, but we usually choose to stay. It takes an hour and a half to drive home and back to the church and the kids are there for… an hour and a half. So there’s no point in going home. And as far as doing anything other than going home, the church is ten miles outside of city limits in the middle of a wheatfield. So going anywhere else is problematic too. We usually just sit around and wait.

Yesterday was tolerable though, because I brought brand new markers

and three pads of heavy paper

. Bede, Trixie and Gloria spent the whole time drawing. I never liked to draw as a child, and I certainly don’t as an adult, so it’s kind of alien to me that someone could spend hours making marks on paper. And the marks look like, you know, art.

Dorothy spent the whole time in my lap. She’s less shy than she has been, but she wasn’t quite up to snuff yesterday still. Here she is, still slightly snotty. 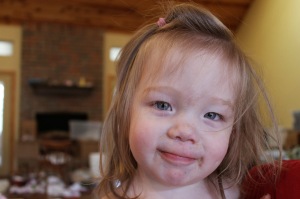 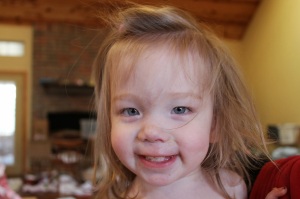 See how I’m keepin’ it real? Just ignore the incredibly messy house and focus on the crusty haystack-headed toddler. Wait, that didn’t come out right. Oh well, she’s sure cute.

It is nice to have a reason for the house to be messy, though. Usually it’s just because we’re kinda lazy.