The footings were poured last week at the new house! That was the last thing we were waiting on. We can move in next week if we like. I am going to wait to move until after Christmas, though. I think. I might be just crazy enough to attempt a move before then, but it is Highly Unlikely.

Here are some of the Wee Glees listening to Sean read today’s Advent scripture. Everyone likes it when we add a candle. The Light increases. 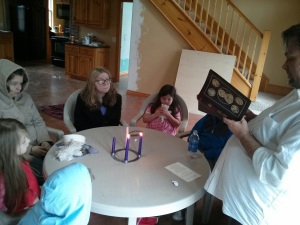 So the question now is one of light and doors. The double glass doors that currently lead to the outside patio will soon lead to two rooms. This will cut way down on the delicious natural light that streams into the living room. In order to keep as much as possible, I am inclined to keep the glass doors, even though they will lead into bedrooms. They can be curtained off, after all, for privacy when it is needed. None of the bedrooms in our house are occupied by only one person anyway, so true “privacy” is moot. In that way I hope to retain at least some of the light. Our builder is skeptical but I think it will still be rather a lot.