Bede loves My Little Pony. We have some of the toys from a few years back when Faith and Abby really liked them, but most of them aren’t good for an autistic boy who has a very strong visual information gathering system. They have superstrong magnets in their hooves, see, and he figured out that magnets + CRT = television and computer monitor destructive fun! So, we got rid of the ponies, for the most part. We have some Ponyville figures from McDs that he likes.

What he really loves is the website and one particular video. The video is called “Dancing in the Clouds” and came with one of the ponies as a promo piece a few years ago. He’s watched our copy about 500 times in the last year, and as it’s VHS, it’s showing significant signs of wear. The colors are pastel and it fuzzes out periodically and has to have the tracking readjusted. I was not looking forward to the slow death of the tape and the accompanying inconsolable grief from my son, but the inevitable was going to happen in, by my estimate, the next six months or so. He likes CG animation a la Pixar, so I was going to get A Very Pony Place and try to transition him to it, but still it was going to be rough. Any kid losing a beloved object is hard, but for my autie it was going to be murder.

But today! Today I went to Borders Books because I had a $25 gift card and I was going to try to find something to give my dear husband for Christmas (struck out) and I found this! 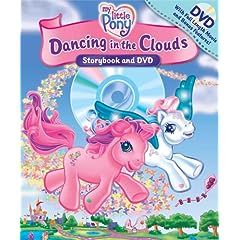 It’s the book and DVD set of the video we have! For $3.99 on the bargain table! Yay! I bought it and gave it to him when I came home and he read the book immediately and we’ve been watching the DVD (the bright, vivid, non-muffled DVD) ever since!

2 thoughts on “my little pony coup!”